Here you can find a brief description of my PC in Bangkok, my Web Server in Bangkok and the computer setup I used to have in Adelaide. You can also find some notes to some installation and configuration issues using Linux (Ubuntu, Fedora) and other software (e.g. NS2).

In December 2010 I bought a new PC to replace the one described in the following. For work since September 2011 I was using a Lenovo Ideapad V470 laptop, and around the same time a PC with Intel i5-2500K.

A couple of days after I arrived in Bangkok (September 2006) and got my room I purchased the following PC which also acts as my TV and sound system. Total price: 38000 Baht (approx $AU1350). 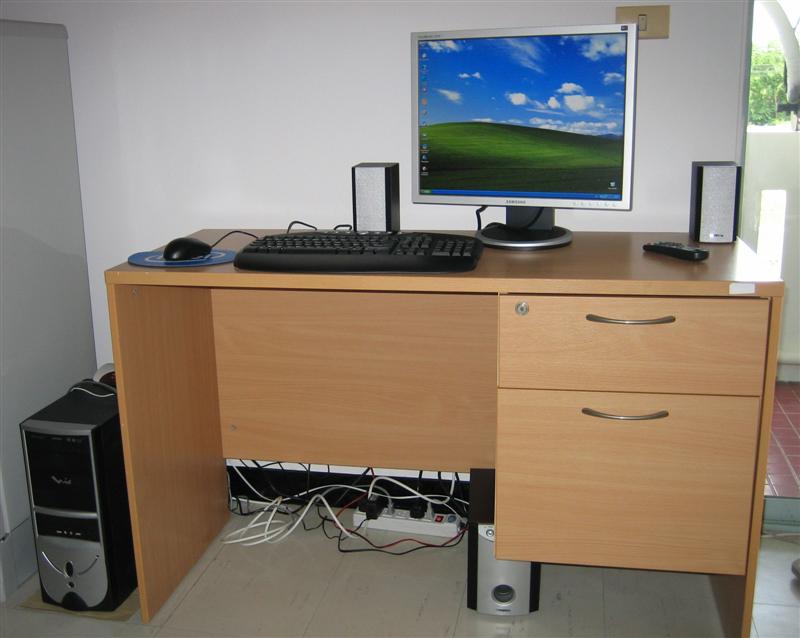 The PC came with Windows XP Pro, Office 2003 and a bunch of other software. However the day after getting the computer I tried installing Fedora Core 5 as well, and ended up overwriting the Master Boot Record such that I couldn't boot Windows (well I think thats what the problem was?). After a lot of stuffing around trying to fix it I decided to go "buy" Windows XP and re-install (the PC didn't come with original software disks). I purchased XP, Office, MS Money and Nero Premium for 500 Baht but I couldn't boot from the XP CD. Again, another half a day stuffing around and I buy another XP CD (older version - 150Baht), but still no success. Finally I use the Fedora CD to remove all partitions (including the MBR) and now Windows CD boots. After another half a day re-installing everything, on Wednesday evening (I got the computer Monday) I finally have a working PC.

The PC runs well, although the main complaint is the fan is very loud. Maybe it was the cheap case I got. Anyway, I'm happy with the purchase, with the best part being by far the monitor. As I am using this as both PC and TV, I decided to get a good size monitor. Initially I was thinking an Acer 19inch or 19inch widescreen LCD (each about 7500Baht), but decided on spending a bit more for the 20inch Samsung. It has a native resolution of 1400x1050, a 360 degree swivel base, stand that goes up and down and the screen rotates 90 degrees. Well worth the 14000 Baht (about $AU500).

Well after a few problems with running sandilands.info from my old server in Adelaide, I'm now running my own web server in Pathumthani (Bangkok), Thailand.

I bought a second hand PC from Zeer Rangsit for 4000Baht. The specs are:

I am running this as a headless server, meaning no monitor is attached. I also won't have a keyboard or mouse (I use secure shell (ssh) to login to the server via Ethernet). Of course, for the initial setup I attached my mouse, keyboard and monitor (this was a bit of a pain as I had to swap between the server and my desktop PC several times).

It will be interested to see how well this second hand PC works. The specs are good enough for my low volume web site - lets hope the hard drive lasts for a couple of years and nothing dies due to the heat in Thailand.

The one piece of hardware I had trouble with as soon as I installed Ubuntu was the 3Com Ethernet card included. I spent a good 6 or 7 hours straight trying to fix some of the related problems but basically it would transfer well at 10Mb/s over a short Ethernet cable but poor transfer rates (about 20KB/s) over a 10m cable (I wanted to have the server in another room from my ADSL router). The rates at 100Mb/s were always about 20KB/s. So in the end I bought a new DLink DFE528TX card which works great (although I again spent a number of hours getting it working in Ubuntu - turned out it was registered as eth1, not eth0 and I didn't notice that).

I used to have a small network in Adelaide consisting of the following components:

Below are some of notes and links that I have used in setting up my home network.